The Julian Chapter by R.J. Palacio

It is usually expected for supplements to a main novel to be of lesser quality, but The Julian Chapter has surpassed all my expectations and arguably left an even deeper mark on me than Wonder did.

One of aspects of the original Wonder that I loved most was how so many different perspectives were portrayed, so I was especially excited when I found out that the author wrote a separate story on the bully's perspective, which was one of the perspectives left out in the main novel.

Throughout the entire story, Julian was depicted as a very privileged and spoiled only-child who lives with his parents, both of whom have very prestigious jobs. Julian was a very sheltered and overprotected child by both his parents due to the fact that he had night terrors at night when he was younger. The night terrors was the reason given by the author for Julian's sharp response to Auggie, because after meeting Auggie, Julian once again began to have night terrors.

I was very unsatisfied with this reason, and it definitely did not excuse Julian's cruel actions and regretful attitude towards Auggie. I was even more outraged when Julian's parents denied Julian's actions, and even tried to sue the school as well as have the principal fired.

Up to this point, all I felt from reading this book was frustration, outrage, and occasional smug happiness when Julian became shunned by his classmates. I was beginning to think Julian was never going to understand his wrongdoings until his visit to his grandmother's house. At first, I was skeptical of his grandmother, because she was described as extremely well-dressed and talked to Julian "like an adult", but little did I know that she would tell one of the most moving stories I've ever heard. When Julian revealed to her his troubles at school, she told Julian her secret story of how she survived the Holocaust:

One day, when Julian's grandmother was just a little girl, the Nazis invaded her elementary school to take all the Jewish children to a concentration camp. As she tried to run from the Nazis, one of her classmates, who was a hunchback, helped her to safety. Julian's grandma became very ashamed of how she once made fun of him, apologized, and became very good friends with him. The boy's family hid Julian's grandmother until the end of the war, but unfortunately, the little boy was taken away due to his disability and never heard from again.

Now here comes my favorite part of the story: after hearing this tragic story, Julian asked his grandmother what this little boy's name is. His grandmother replied that his name is the same name she had given to Julian's father, as well as Julian himself. Julian (as well as I) was shocked that he who was named after a courageous disabled boy had bullied another disabled boy. It's simply too ironic. Finally, after Julian's parents arrived to pick him up from his grandmother's house, Julian's grandmother had a very serious talk with Julian's parents about being proud of Julian for taking responsibility for his wrongdoings instead of denying that Julian had done anything wrong.

The story ends with a changed Julian, ready to sincerely apologize to Auggie, and excited to become a kinder person at his new school.
Posted by Unknown at 9:59 PM 1 comment:

Email ThisBlogThis!Share to TwitterShare to FacebookShare to Pinterest
Labels: fiction, growing up, redemption

Wonder is the kind of book that shakes you to the core and makes you wake up the next morning wanting to change the world.

At least that's how it made me feel when I finished it at 2:30 in the morning.

Amazon's summary on this book is this:

August Pullman was born with a facial difference that, up until now, has prevented him from going to a mainstream school. Starting 5th grade at Beecher Prep, he wants nothing more than to be treated as an ordinary kid—but his new classmates can’t get past Auggie’s extraordinary face. WONDER, now a #1 New York Times bestseller and included on the Texas Bluebonnet Award master list, begins from Auggie’s point of view, but soon switches to include his classmates, his sister, her boyfriend, and others. These perspectives converge in a portrait of one community’s struggle with empathy, compassion, and acceptance.

This story is so raw and honest, and it has taught me that everyone has their own unique struggles, even if it's not quite as obvious as August's. In all honesty, though August's narratives were very moving and heart-wrenching, it was the narratives of the other characters in Auggie's life that really intrigued me. It was very interesting to read about how other characters were affected by August (such as August's sister Olivia), and what their struggles are outside of the seemingly August-centric universe.

Out of all the characters, the two characters that most intrigued are the two that were seen as "the jerks" in the beginning of the story, but become characters a reader greatly sympathizes with at the end of the story. Throughout the story, the  two characters, Miranda and Jack, were portrayed as back-stabbing "jerks" who are that way for simply no reason. However, as I continued reading through the parts narrated by Miranda and Jack, I finally understood why they had been so hurtful.

These characters are not the simple "jerks" they appear to be; they are just like everyone else, struggling with their own secret battles. The hurt Miranda and Jack inflicted on others were not intentional, but accidents from desperately trying to shield themselves from hurt.

(In the section below, I explain Miranda and Jack's struggles. As I mentioned in my biography, I am the kind of person who loves spoilers, and sometimes even need spoilers when reading books. If you're not that kind of person, scroll down past the starred section.)

Miranda did not begin to shun August's sister Olivia simply because Miranda wants to be "cool"; it is because Miranda's parents have recently went through a nasty divorce and Miranda is afraid of talking to Olivia because she knows that Olivia will try to talk to her about her problems. So instead, Miranda stopped talking to Olivia and made friends with people who Miranda knew would not care to ask about her miserable life.

The reason why Jack was trash-talking August behind his back was because Jack was afraid that he would lose all his friends at school from hanging out with August. Jack was afraid of becoming an outcast, and being alone at school, so he tried to pretend that he hated August around the "cool" kids, while deep down inside, Jack actually really liked August and though August was the funniest kid ever.

In conclusion, the biggest lesson that I personally took from the story is this:

I would definitely recommend this book to everyone of all ages.
If everyone in the world read this book, I sincerely believe that the world will become a much more sympathetic and kind place to live.

(R.J. Palacio has written some other books related to Wonder, which include Julian, Pluto, Shingaling, and 365 Days of Wonder. I will definitely try to get my hands on them ASAP and I can't wait to read about August's story in more different perspectives!) 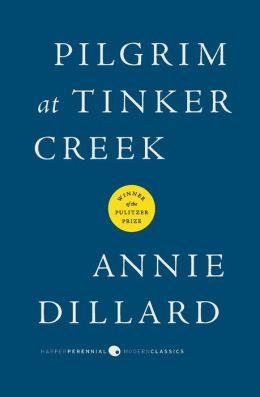 Pilgrim At Tinker Creek was one of the most interesting books I have ever read, and I would consider it  to be one of my favorite books, as well as one that I would reread. However, I would not recommend this book to most people, but if you're the science-y type or a lover of many random often gruesome topics, then you may want to try this book out.

This book is 304 pages long, and it took me about a week to finish. It is a nonfictional work about nature and theology. According to Amazon,

Pilgrim at Tinker Creek is the story of a dramatic year in Virginia's Roanoke Valley. Annie Dillard sets out to see what she can see. What she sees are astonishing incidents of "beauty tangled in a rapture with violence."

Unlike many other book descriptions, this is a pretty accurate description of Pilgrim At Tinker Creek. I really enjoyed Dillard's inquisitive, humorous, and sometimes ridiculous tone throughout the book. Her little anecedotes contained in every chapter are delightful, and most of all, I am simply shocked by all of the random things that Annie Dillard is knowledgable about and has written about in the book. Some readers think Dillard is simply pretentious, but I just love all these random bits and pieces of interesting stories and information. Thank goodness the Kindle app allows me to easily look up all the obsurcure things she talks about on Wikipedia.

This book was actually an assigned reading for an academic decathlon competition that I participated in, and it was by far the most hated-on assigned reading by my peers. I was repeatedly warned by every teacher/coach and previous readers of how verbose and tedious this book is, and told to just "grind through it".

But, being the stubborn person that I am, I was determined to force myself to like this book despite everyone else's opinions, and luckily, it wasn't very hard for me to enjoy it. I did start getting a little tired of it towards the end; this is not a book you can half-heartedly read while being half-asleep from studying APs.

In conclusion, this book really inspired me to ponder upon topics that I have overlooked throughout my life, and I learned many new tidbits of information from this read.

What are your feelings towards spoilers?